News Literacy is a curriculum developed at Stony Brook University in New York over the past decade. It is designed to help students develop critical thinking skills in order to judge the reliability and credibility of information, whether it comes via print, television or the Internet. This is a particularly important skill in the Digital Age, as everyone struggles to deal with information overload and the difficulty in determining the authenticity of reports. In the Stony Brook model, students are taught to evaluate information primarily by analyzing news as well as new forms of information that are often mistaken for journalism.

These challenges have created the demand for a new kind of literacy—a literacy that empowers news consumers to determine whether information is reliable and then act on it. A healthy civil society can exist only if the public is well-informed. If people can be easily led to believe rumors or gossip, the consequences can be dangerous.

The Gutenberg printing press launched a communications revolution that altered power relationships around the world. But Gutenberg’s revolution and subsequent communications advances like radio and television still largely left the power to publish in the hands of corporations, interest groups, governments and wealthy individuals.

This latest communications revolution has transformed society anew, for it has made it possible for everyone with access to a computer or a smartphone to publish information. It is a positive development that the public is now able to share their knowledge with others, but as Uncle Ben told Peter Parker in Spider-man, “With great power, comes great responsibility.” A significant goal of our course is to persuade our students that they have a role to play in the quality of information on the Internet and Social Media.

The News Literacy Stony Brook model uses heavily illustrated lectures followed by hands-on exercises to help students understand how journalism works and why information is such a powerful force for good and ill in modern societies. The goal is for them to build critical thinking skills: 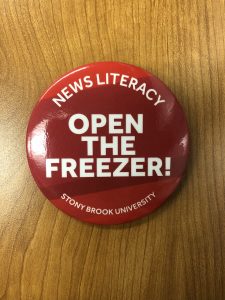 The goal is for our students to have a sense of ‘Too Good To Be True” – like those outlandish photos of sharks in New York City that appeared after Hurricane Sandy. Once that alarm has gone off, then the news literate consumer can either disregard the information or pursue other sources in the information-rich world in which we live.

Thus far over 10,000 undergraduates have taken this course at Stony Brook, and more than 30 US universities have adopted or adapted all or part of the course. In the last few years Hong Kong, Mainland China, Malaysia, Australia, Vietnam, Israel, Russia, Poland, and Myanmar have partnered with Stony Brook to develop curricula tailored for their students. Stony Brook provides all lectures and materials and conducts training workshops at no cost to interested educators.

A new generation of news literate citizens who demand high quality information will also shape the future of journalism, determining the balance between information that is important versus that which is titillating – a struggle that has been part of journalism from its beginnings. Savvy news consumers are already beginning to understand the value of the journalists’ ability to authenticate and then put into context the vast amount of information that constantly floods over us. Citizens can vote for reliable information by frequenting web sites and following Social Media outlets that check the facts as much as possible, strive to avoid conflicts of interest and take responsibility for the information they publish. Just as it is often said that in a democracy citizens get the government they deserve, in the 21st Century newly empowered consumers will get the journalism they deserve.

The ability of the next generations of citizens to judge the reliability and relevance of information will be a leading indicator of the public health of civil societies around the world.

Invest in the center for News Literacy